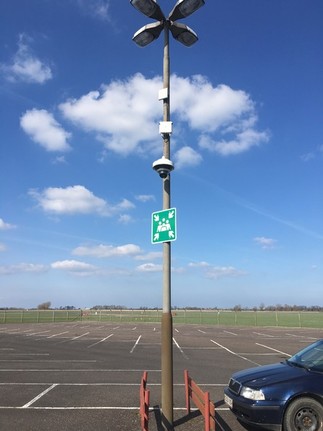 The name HC. Andersen Airport sounds a bit of adventure, storytelling and bygone times. But there is nothing old-fashioned and outdated over the airport at Odense in Denmark. It is a modern airport that transports traveling Danes to destinations across most of Europe - not in flying suitcases, as you might think, but in state-of-the-art scheduled flights. Of course, a state-of-the-art airport also includes state-of-the-art security equipment, and installer SensorTek came to the rescue using Hikvision cameras, including DarkFighter and PanoVu models.

More than 20,000 passengers use HCA Airport every year. Most of them are charter tourists who typically travel with children, luggage and a lot of extra equipment such as bicycles, strollers and the like to be kept in mind.

"In busy and busy situations, confusion and panic can easily arise, so people forget their things. Therefore, leaving luggage need not always be a ‘risk’. In most cases, it's luckily just a piece of forgotten luggage, but we can’t afford to take any chances, so we have to act every time a left object is observed. The safety of passengers and personnel must be paramount. Therefore, we have now chosen to install video surveillance both inside and outside the airport, "says Michael Mørk, Head of Security at HCA Airport.

The airport collaborated with SensorTek on a number of security solutions, including video surveillance, for which they specifically recommended DarkFighter PTZ cameras. They did this because of the ability of this type of camera to provide sharp images even in the dark and in poor lighting. In addition, the cameras can automatically move and zoom in and its superior image quality makes it possible to zoom in so close that you can see a person's face, for example, clearly.

The CCTV solution is also equipped with intelligent software that detects changes to the status quo. If a camera observes an item somewhere where there was nothing previously, the system will automatically trigger an alarm. The same applies if people exhibit behavior that differs from the norm. For example, a passenger may move outside the areas they are usually allowed to move in. Then, the system will also trigger an alarm, and the security staff can, with the help of the video material, assess whether their efforts are needed or in case of a malfunction.

"This saves our security staff a lot of time every day. At the same time, it gives us a better chance of documenting events than we could before," says Michael.

It's all managed easily via an app, so security personnel can access the system from home if needed. Both the airport's indoor and outdoor areas are equipped with video surveillance. This means that people can safely move around and around the airport at all times of the day - leaving their cars in the parking lot without the risk of theft or vandalism. Some of the cameras are activated by motion and automatically zoom into an object that moves, for example, a person approaching a parked car.

HCA Airport’s team wanted to increase safety for both passengers and staff. With the help of SensorTek and Hikvision, they have now also achieved a far better opportunity to be aware of events and actions before a potential situation develops. In addition, they have better documentation of events than before.  Now even Andersen’s Thumbelina would have a hard time avoiding security.