Body Cameras - Innovative surveillance that you can wear

Body Cameras - Innovative surveillance that you can wear

Over the past few years, a need has been identified to record interactions in day-to-day dealing with law enforcement officers. This has led to a rise in the use of wearable recording devices, like body cameras, by police forces worldwide. The forecast for shipment of body cams is 1.59m in 2018, rising to 5.62m in 2021, so this trend is set to continue. Smart technologies, procedures and training are poised to change the way law enforcement officers, among others, interact with the public – with a view to reducing the amount of violent clashes between them.

Hikvision technology
Rugged, wearable body cameras record activities of citizens and civil authorities as they happen. They are designed to be portable and easy to use, so they do not get in the way of day-to-day operations.  The 110˚ lens and recording resolution of 1080pixels/30frames per second means that they can capture incidents clearly and effectively.

These cameras build forensic evidence with data that is stored safely, and play back video footage clearly and accurately. Sporting a replaceable battery design, with a built-in supplementary battery to supply power during a replacement means the recording can be uninterrupted.

They are also equipped with GPS locators, to give central control centres the ability to find out where an incident is occurring and provide back up, for example. 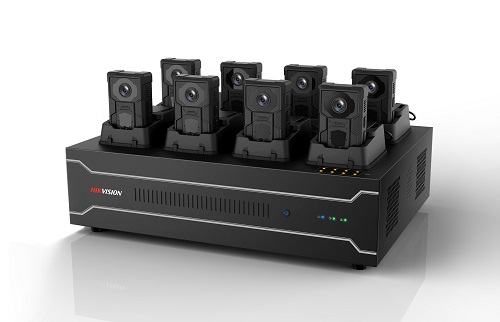 A new addition to the Hikvision product portfolio is a Dock Station for the cameras, which can charge the units and simultaneously collect the data from them. Designed for up to eight units, the Dock Station can upload the date, police ID and recorded data of the body cameras.

After the data is collected, the cameras can be wiped, helping to provide privacy and data management, and clearing the camera for further use.

Scenarios
The most obvious use case for these devices is the police. A large number of forces across the world have now embraced body cameras as a way to record incidents as they happen on the street. The idea is that both police officers and members of the public are more likely to behave appropriately if they know they are being monitored. This leads to a better interaction between officers and the communities they work in every day.  In fact, research carried out by Cambridge University in the UK in 2016 found that complaints by members of the public against officers fell by 93% over 12 months compared with the year before.

This is a similar tale across the world where authorities are recognising the value of recording technology right in the midst of regular policing.

Security companies also show interest in this technology, since it’s suitable for all security guards. If something happens at a home they protect, for example, they can send over security guards to check on site and send live video to the villa owner by 3G/4G.

How they are used
Of course, a lot depends on how the cameras are used. Some forces have the policy that the camera needs to be recording all of the time when a police person is on duty. Others ask the officer to start recording in certain scenarios – for example when going into certain areas, or answering a call where the incident may be partially known.

It’s also possible for devices in the future to be set up to automatically start recording when the light levels get lower than a predefined lux. It could also be that the ‘start’ function is linked to another action, for example when an officer takes out a taser.

With Deep Learning technology the development possibilities are endless, with facial recognition already available in some models. This means that identification could even be made using the body cams linked to a database.

It seems sure that, to effectively police the modern world, some kind of wearable recording technology is needed. Hikvision is at the forefront of innovation in the security and surveillance field and the Body worn cameras and the Dock Stations will prove a crucial addition to city solutions now and in the future.