Giving people a live view of their city

Giving people a live view of their city

When it comes to keeping tabs on a city, usually the local authorities are the main customer. But in a project in Belgrade in Serbia, cameras were installed to give the residents a view of their city – to see what’s going on, especially on the roads to avoid traffic. Hikvision cameras were used by our partner Antenall to do just that.

KBC Online, one of Belgrade’s Internet Service Providers, wanted a special service for the city, showing live feeds from various relevant points. This would enable visitors to the site to be able to see what was going on in those points, which include traffic hotspots, bridges and public squares cameras.

On a more practical level, KBC also wanted to be able to give people a tool to help them plan their travel by seeing traffic jams as they happened. Being able to see the traffic building up in certain places around the city is incredibly handy for people who are just about to leave home or work. They can make a decision to stay put for a bit longer, rather than having the stress of being in a traffic jam. It also allows them to plan the rest of their day a bit more effectively.
Another element of this project was that, due to local laws, only the police are allowed to record from these kinds of surveillance solutions. This meant that the live feeds on the website could only be viewed.

KBC approached Antenall, one of the leading security providers in Serbia, to come up with a solution.

The Solution
Our partner Antenall, worked with KBC to install 18 cameras at the locations around the city where the company had existing base stations. These were already prime locations for the service and had government approval. 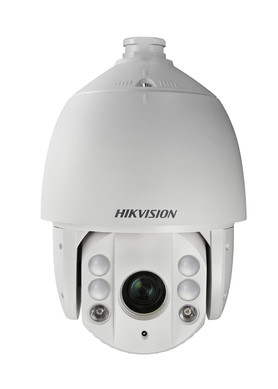 Hikvision speed dome cameras (DS-2DE7184-AE and DS-2DE7186-AE) were chosen because they provided flexibility to cover more interesting spots from one position. This was due to the pan, tilt, zoom nature of the cameras, but also because they had some specific, useful features. Optical zoom of up to 30x and the ‘patrol mode’ function allowing 8 patrols (and up to 32 presets per patrol) gave the flexibility to offer viewers the widest and deepest view of the location automatically. The cameras also offer full HD resolution – something very useful in this kind of city project.

A visitor to the website can see the live feed from the cameras for free as well as a map showing where they are located. When they click on the red location indicator on the map, they can see a “pop up” of the feed from that position. However, they are not able to record from the site – designed specifically for this to adhere to local laws.

Nemanja Popović, Sales representative at Antenall, says: “The Hikvision cameras really provided the ideal solution for us in this project. Not only do the features provide a flexible coverage, the Hikvision solution was the perfect balance of best price and suitable quality.”

Nikolić Tihomir, manager at KBC Online, says: “Benefits are numerous - with these project we helped our citizens to view traffic jams in real time and find alternative routes, so they can avoid stress and lateness. The service is very popular, with over a 150,000 users daily watching the cameras. As a result of this project, we are currently the only company that can offer live view city cameras.” 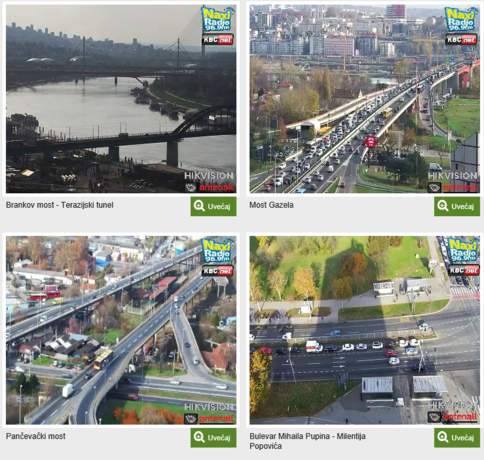 This also bodes well for the future, with cameras planned in more locations in Belgrade, as well as other cities around Serbia. In this future expansion of the system the team will use cameras with 30x optical zoom for better view of distant traffic junctions.

Check out the live feed from the Belgrade cameras on the KBC website - http://www.naxi.rs/kamere.